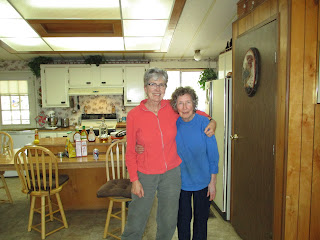 On Monday afternoon I got the horrifying phone call from my brother that he had arrived home from work to find my mother sitting in her chair, awake and unaware, and not able to move. I had spoken with her via phone the day before and everything was normal. Of course, we suspected the verdict--stroke--and it was confirmed by the emergency room. My mother still lives alone on her large property in Bend but my brother lives on her property for any oversight and help she needs. At 94 she was still packing wood and building her fire, cooking huge dinners for him and doing all her housework on her own. The only thing she had recently given up last Spring was driving.

The afternoon and evening were a blur of tests, scans, doctor talks and consultations, but the prognosis was extremely grim. My brother and I knew she had a do not resuscitate order and living will made out but we still had to make the extremely painful decision of whether they should pursue any medical interventions. Following her wishes, we told them to allow nature to take it's course and only provide pain relief and palliative care, but nothing life-prolonging. I felt as though I was signing her death warrant, but it is of some comfort knowing she wouldn't want to live forever hooked up to tubes, unable to speak or move. That's not living.

Many might question my still being in Wisconsin, but all along there has been little indication that she has been capable of knowing, understanding, or even hearing what is being said to her. At first possibly, but since the second day as she sinks deeper and deeper into the morphine sleep, not so much. So little is known about the true conscious thoughts of a heavily damaged brain, excepting that hearing is the last sense to go, so everyone is loving and encouraging that it is now her time to join her dear husband whom she's missed so much.

As of this morning she is still clinging to life in Hospice but is a very wasted shell.  My son and daughter-in-law stand death vigil since I sit with three cats waiting for Marc to arrive with his truck and trailer from New Mexico. Once here, we will pack up the RV and head for Bend, not expecting to be able to do anything beyond take care of the elements of her life in shedding her worldly possessions, her death business details, clean and market her property and get her ashes interred next to my father's at the small pioneer cemetery in Northern California, her final stop on a long, long life.

We figure we could be there for at least a couple of months so it certainly changes up what we thought would be transpiring with our plans. My heart right now is jagged and raw, but I try and keep the thought that she lived a long life and was healthy, fit and doing it on her terms, with independence--right up until the moment she wasn't. That's something to be thankful for and the kind of old age and death all of us would wish for and crave.