Winter was supposed to have turned to Spring a few days ago, but it didn’t get the message here in Wisconsin. Our temperatures continue to run about ten degrees below normal and I sit gazing out at falling snow this morning with more possibly to come late this week.

Yes, this has greatly hampered the start of our endeavors on the new property, especially since the climate up north is even worse by 5-10 degrees and much more snow than we have here in our “banana belt”.

So, there’s not a lot of progress to report as yet, other than the fact of as one friend put it: “You’re building your house from inside-out.” Say what? You see, Marc worked on getting our laundry room cabinets built for our current home and since has moved on to tackling those in the less important areas of our new home. He started with the utility room, which will house our washer/dryer, heating system, water heater, pantry, and freezer space. We’re putting uppers above the washer/dryer just like he did in this house. 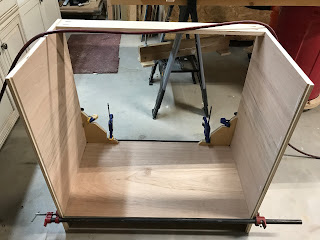 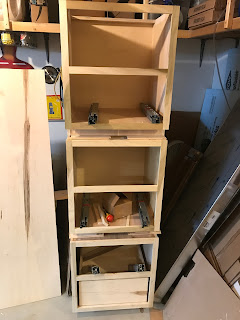 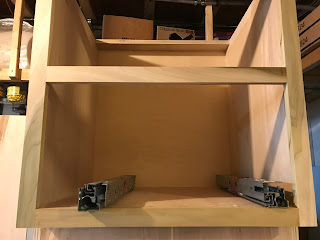 In fact, much is being copied from this house, including the vanity sizes of the bathrooms. He moved to that next. He is now working on his “hobby/office”, where he intends to have a built-in desk/table with huge drawers running the length of one entire wall. I am still contemplating how I want mine set up and once I know, he’ll likely move on to that if there’s time before we go north. 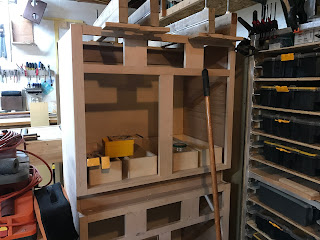 Meanwhile, back at the ranch, he ordered and received delivery of an RV storage building from Versatube which he’ll be erecting shortly after moving north this summer. We decided rather than take up shop space, the RV would be better in its own home where he wouldn’t have to constantly dance around it in the way. It now sits on Marc’s large flatbed trailer, awaiting transport north when the snow clears. 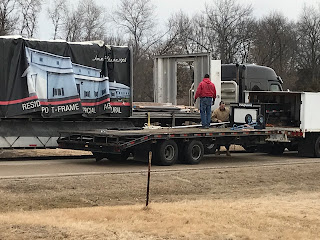 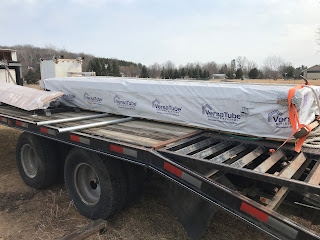 In trying to get some major decisions about the kitchen chosen and out of the way, I’ve spent too many hours perusing the internet and studying ad nauseum different countertop possibilities. I’ve never really faced this before, always having Formica or tile in our previous houses, but for once, and since this could well be my last hurrah, I wanted something more luxurious and am finally willing to spend the money to get it. My first choice and last would be soapstone but when we visited the stone yard, Marc wasn’t onboard with that at all. He doesn’t care for the way the edge detailing is very limited since the stone is prone to chipping due to its softness. 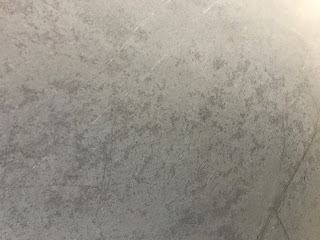 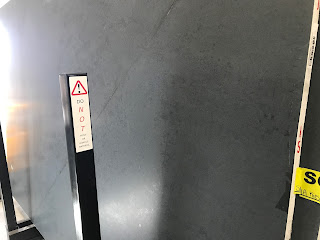 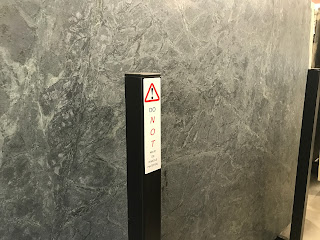 I’ve never been one to care for the business of granites, but low and behold, they have come up with some really novel choices and I may now be ready to consider it. We came across a really interesting piece they had on display as an island bar (yes, they have a real gratis bar set up in the stone facility with craft beers on tap, wines, and high dollar booze.) which was dark and done in a leather finish with a chiseled edge. It comes in browns, gray, or black. Marc loved it. It did feel silky to the touch, with interesting divot texture and I too, loved the chiseled edge which lends a rustic touch and something you don’t see all the time. 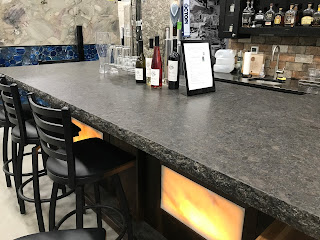 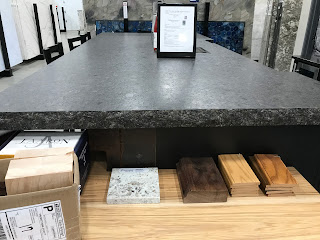 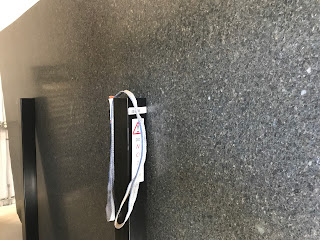 One of my objections to granite has always been the highly polished surface which comes across as too foo-foo looking to me, so this was a refreshing change. This had a slight gloss to it, which is actually the sealer they put on which is guaranteed for 15 years against stains and damage. One can choose not to have this though and this photo shows the three samples I received; the two larger ones being the natural surface after leathering without the sealer and the square piece having sealer applied. 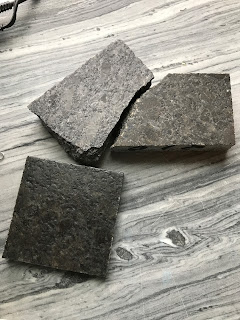 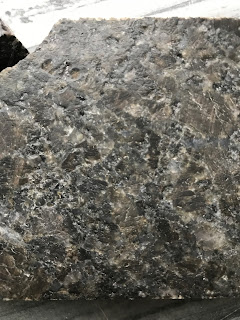 To make this choice even more agreeable, this type of granite is very dense so more indestructible and on the lower end of the pricing scale. We’ve drawn up our kitchen layout (more on that in a second) and will take it back to the stone yard soon for a price quote. They can hold the stone indefinitely with a deposit and right now have good selection so I am thinking of locking in the price now even though we likely won’t need it for a year. Shipping costs are supposed to continue to go through the roof and this stuff is all imported.

Being math challenged, I was having a hard time playing on a small scale with our kitchen layout so Marc finally helped me out by making full size replicas in cardboard that we could lay out on our current kitchen floor with taped exterior measurements to see how everything would fit. Unconventional, but it worked, and we were finally able to put into place all the desired items in their rightful placement! What’s comical about these photos is that you can see what I’ve lived with as an “island” for seven years! We never did get around to figuring out what we wanted and by the time we had it figured we were thinking of an up north place so at this point, it won’t get done. Islands are expensive and the next buyer can figure out if they want one. We were moving these pieces around though to try and figure out our new house island, which will incorporate our butcher block (minus legs) and be large enough for seating for four. The new kitchen by the way, will stretch to the wall behind the table/chairs and over to where my current cabinets sit to give an idea of the size. 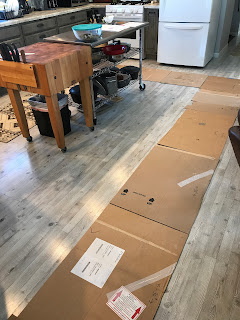 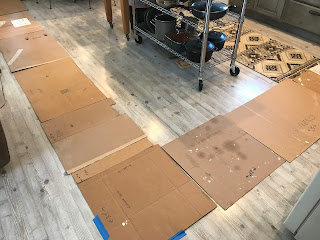 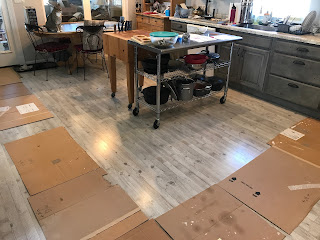 Coming up, Marc has an appointment with the power company field guy on April 24th to ascertain how power will be brought into the lot. We’re some distance from the main road and the poles. By then, we hope the ground is thawed and we can get going on installing the gate, drilling the well and putting in the septic. We’ll haul the RV there as soon as we can and it stops freezing, to live in this summer. There is SO much to do; our plates will be full, full, full.

Claudia
My husband and I are transplants to WI from a lifetime in the West. We're now fully retired, but not stopping!. Since we're no longer fulltime RVers, we continue to enjoy our RV on shorter jaunts. We're also starting a lifetime dream of owner building our new home directly on a northern lake. Much of my free time is spent volunteering for the Humane Society, a highly worthy cause.