We Made a Deal

While we were driving some back roads looking at properties in Virginia, Marc was talking with his old project manager from MSL. They were discussing how the Superintendent that was hired for their Farmington, NM job had just been arrested for wife battering and kidnapping and was in jail. I piped up to Marc: “Ask Doug how much he’d pay for an experienced Superintendent in a hurry?”. It started from there.

From the get go it was about enough money to make it pay for Marc to once again, live out of town for a long period of time. We feel we accomplished that goal and the company was enthusiastic to have him back! In this time of little experienced labor available, knowing they could depend upon Marc and his vast degree of knowledge and gumption to get things done, they knew their new assisted living project would be in good hands.

A couple weeks later, with his old Dodge and a cargo trailer loaded to the brim with his personal items and tools, Marc headed west. The company is providing him with an included rental condo, per diem pay, and a generous auto allowance for using his own transportation. Farmington, NM is nothing to write home about, stuck out in the middle of the desert, but he says it does have decent shopping. Most of his subs appear to be decent so we’re hopeful he can have this project put to bed within a year to 14 months. The company will fly him home every two months for a week’s stay; his first upcoming visit is the second week of July.

That’s the background; now for the “deal”. His goal was for enough cash to build a large pole barn—large enough we can fit the RV, the Freightliner, Chevy, and still have work space; oh, and a boat! You see that’s my part of the deal: for the pain of having him gone yet another year, my “price” is that we will (finally) buy a decent boat.

My fantasies are in high gear as to what kind will be best for us at this stage of life. I like the idea of having something larger, but worry about fuel consumption and maintenance. I like the idea of being able to trailer to various lakes, but on the other hand, I am also mightily attracted to houseboats, where we could lazily cruise and fish the river and Lake Winnebago and have the cats along with adequate space for them. Moored in a slip it could be like a cabin getaway on the water! Could we even entertain the idea of building our own houseboat on used pontoons? It’s an intriguing idea. This beauty is by a master woodworker but could be used as a template for its shape and size. Closer to home with our skills however, the second example is more highly probable! 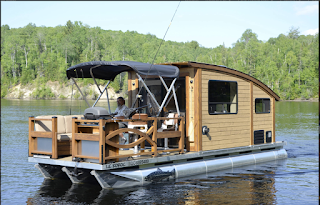 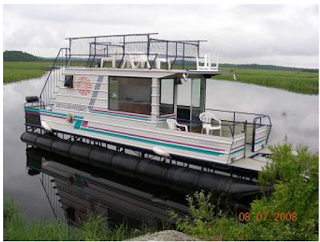 Before the boat however, has to come the pole barn, since we won’t want to let the boat sit outside to ruin. All of this will be at least two years in the future but some things are worth waiting for, aren’t they?

The idea of moving has gone by the wayside in these turbulent times. We’re just too set up here and it should now only get better with Marc having his pole barn. Given today’s high construction and real estate costs, our cost basis in building this home and all the sweat equity we have as a result is at never-to-be-seen again pricing. That’s pretty hard to give up. And we do love Wisconsin life!