Likely to Change it up Again 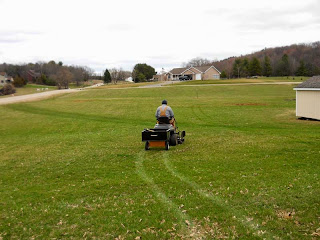 Yeah, it’s not like we purposely set out to always be changing our minds, but in regards to our first choice of house it is just proving too costly to do that plan. Costs have escalated much beyond what Marc was even aware of in regards to building (just look at the inflation factor involved in the cost of appliances over the past five years as one example. You’d think refrigerators had to be made out of gold for what they are costing now!).

Since Marc didn’t really have the time, I have been scrambling on forays out to talk with builders and look at modular homes. Much of the building done in the northern Midwest is of modular construction because of the short construction season and bad weather so probably six or seven out of the normal sized newer homes are actually built that way. The construction, being done in a factory, is precise and timely; many of the wood cuts are even done now by computer operated robot jigs so the consistency actually far exceeds field standards achieved by a perhaps a hung-over construction framer.

Modular’s are built to a different and higher code level than manufactured homes and are always set on a real foundation using exactly the same materials as a site built home. They are transported to the site in sections on trucks but have no frame or axles like a manufactured home and thus are known as two, three, four or even five section homes. Erection is quickly done via a large crane on a foundation which has already been completed by someone else usually. Depending upon the manufacturer, one either has practically unlimited upgrade and option possibilities or limited options within a range of vendors, but all of which can add significantly to the cost. We have determined that we will be better off sticking with items that are standard grade that can easily be retrofitted and changed out later as Marc can do it and we can afford it. For instance, we have eliminated an attached garage to begin with and will likely go with builder standard flooring. We figure the important thing is to be able to be living in the home and enjoying our wonderful property sooner rather than later, and to us the sacrifice of time for higher quality materials is just not worth waiting for.

Blenker’s system is for factory assembled walls, which include the windows and insulation and house wrap, floor systems complete to the subfloor and roof trusses. They can also go farther to complete an enclosed shell stage and they have a division which uses their factory system plus a contractor who oversees on-site construction right on through to a completed turn-key house if one wants. Due to Marc’s demanding job he won’t be getting the time to actually work on our house as much as he thought for cost savings so with few exceptions (the basement; interior painting) we need the completed package.

We stepped away from most items which drive up the cost of construction and are now at a stage where Marc will rough draw, to scale, our own plan. Well, don’t tell anyone—it’s actually a plan I ripped off from one of the modular companies, but we will be making enough changes that we make it our own. From there, Blenker’s engineers will actually draw it up so it can be budgeted out. It will be simple and easy to modify so we can eliminate things now (like the master bath) that Marc can add in later.

It will be totally rectangular in shape with a simple one direction gable roof and a nice sized covered and screened front porch which will run the width of the home and be deep enough to accommodate our spa, which Marc intends to move from Yuma.

If this proves too expensive, then we will regroup yet again and likely order the similar plan from the modular company who sells it since I know theirs is within our budget. Right now, that’s our story and we’re sticking to it.

Yesterday, despite the cold and blustery day, we finally chose the the house placement and Marc got it staked so we could visualize the views, etc. Although the grass is quickly turning green we have yet to see any trees budding out so the end of April here still looks much like winter minus the white. He immensely enjoys riding around on his riding lawnmower and it won’t be long until we are into the routine of weekly mowing. 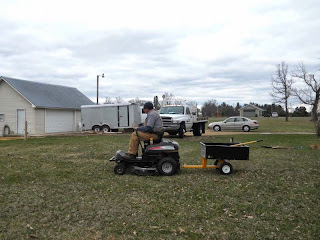 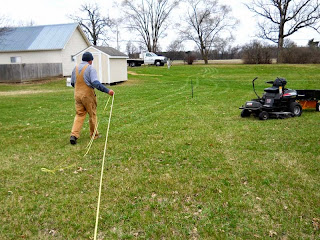 In the first photo of Marc on the mower you can note the flat spot which is the area where the original old farmhouse used to stand. We have measured out an area here of 50’x30’ which will be fenced in for our garden. We didn’t want to place our home so close to the highway so it is going much closer to our back property line which will allow our side yard to incorporate our apple trees. You can note our side yard property line stake beyond the trees but now that we are purchasing the additional acre it includes the lot with the dirt pile and off into the distance towards the far house where you might be able to see the stakes by the white vehicle. That’s a lot of mowing! 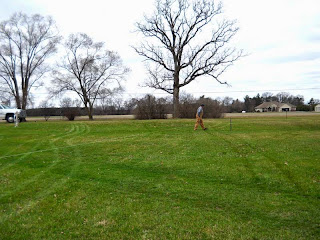 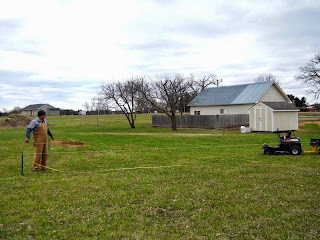 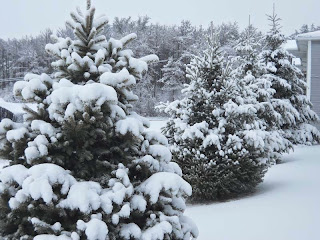 Fooled ya, didn’t I? Fooled us as well to wake up to this in the middle of April. 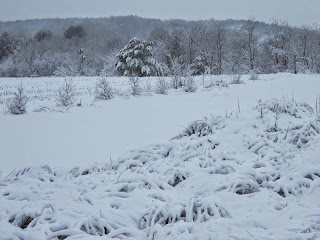 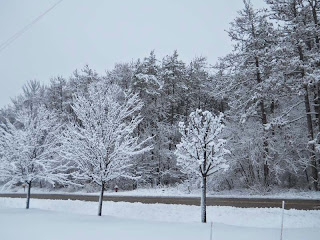 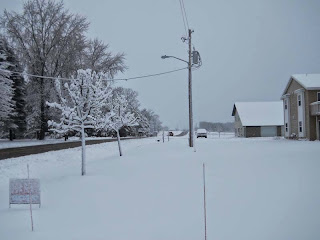 Marc’s surgery last week went well and the mass tested benign. It was a very large growth; he’ll have around five inches of scar gracing his lower back but he’s just happy to have it out. He returned to work today even though sitting upright in a chair is still painful.

He did get the property corners all marked and staked this weekend on our lots but I neglected to take photos. We decided on a 50 foot by 30 foot spot for the garden where the old farmhouse used to stand. That makes it convenient to the water outlet. Next will come lots of post-hole digging once his back will allow the movement, as we have to put up a tall deer fence before anything is planted. Of course, with weather like this, gardening is just a happy dream for now.
Posted by Claudia at 10:16 AM

Well, the sun has come out this morning on a brand new “snowless” day. We only thought we were through with ol’ man winter; he struck again this past week, leaving Marc on the edge of Minnesota with a closed freeway yet to drive in front of him and me sequestered inside yet again.

There hasn’t been much of note to comment on lately and I figure most folks have enough of the mundane in their lives they don’t need more from me. Now having health insurance for the first time in many moons, I’ve been catching up on all the wellness tests and exams the new Obama Care covers at no cost, including the dreaded colonoscopy. Thankfully, all went well with everything and I felt quite good at only receiving a bill of $236 for $4300 worth of medical tending to.

Next, it is Marc’s turn; he’s had a fatty tissue tumor growing on his lower back for years so he is scheduled to have surgical removal of that this coming Wednesday. That will earn him the rest of the week off work as he is forbidden from driving. Of course, his will cost a pretty penny since our policy has a $10,000 deductible so is virtually worthless for anything short of catastrophic happenings.

Although I haven’t been out to our lot lately, I’m sure the snow is about gone. There was a huge difference in just a week’s time in mid-March as you can see from the photos. Now that we can actually see the terrain our next step is to do some planning on placement—where we want the house, where we want the garden and the very tall fence we are going to need to keep the deer out. Marc has worked hard (with his little spare time) to build walls of shelving in the garage and is redoing the entire electrical there as well. It feels like baby steps but with him gone out of state much of the time and working such long hours, this project will likely slide by at a glacier’s pace. Life never goes as planned, does it? 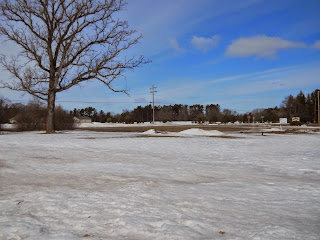 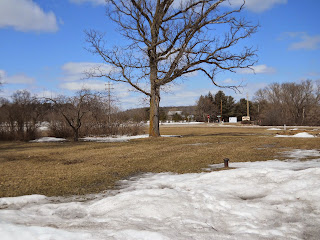