It's Been a Slow Slog 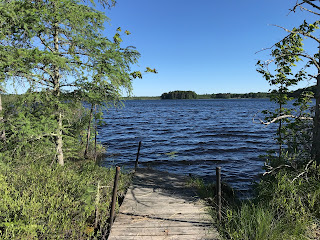 About a week ago we finally saw the power trucks appear to set the power poles necessary for our getting electric power. We applied with this private coop company in January and paid the necessary membership fees with application. Marc met with the field engineer to determine pole and line placement in mid-April. Since then, it’s been one thing after another to delay us, so it was a relief to see them finally appear. Never before have we had to fork over all the money up front as was required for them to even consider putting us on the list, where we were #24. Once things began however, they moved quickly and we finally got “wired”.

Dealing with no electricity as Marc started construction work was a major headache. Running the generators ended up costing us around $300/mo. for fuel so definitely not cheap electric! We got the 500 gal. propane tank set and filled and we moved the RV closer to it so we can hook directly to it instead of having to fill the ten-gallon tanks continuously. Just this past week our well was dug and although it is filled with iron, it is a good well at a shallow depth. He went down 40 feet and found about a 50-gpm flow through gravel. It’s going to require quite a bit of filtration and water softening to make it potable. 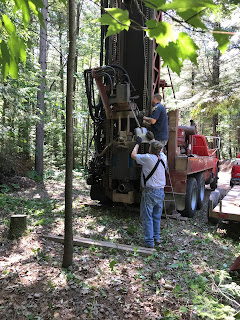 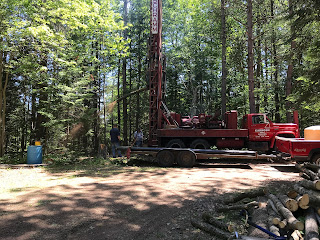 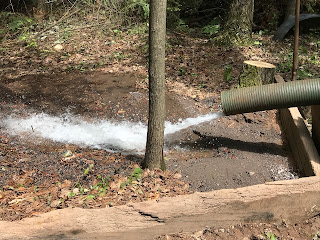 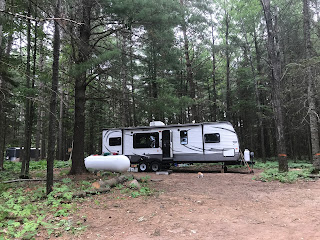 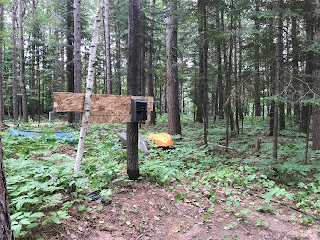 Marc started the boat shed, 10x20’ with a 9-foot ceiling, as he intends to hang the kayaks and still be able to park our small aluminum boat underneath on its trailer. Premade trusses were too much so he opted to do it old school and build rafters himself. He’s now on the roofing; siding will be vinyl. The door is ready for pickup at Menard’s; it’s a roll up. Everything seems to be taking longer than expected; throw in a handful of really hot, humid days when not much got done, and it doesn’t seem as though we are very far along. Marc often crawls down from the roof and ladder and says “I’m too old to do this shit” so I know it is a hard trial for him and his body at his stage of life. 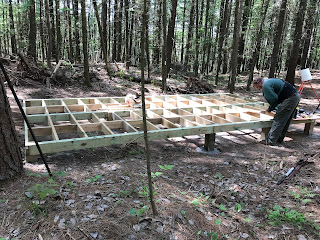 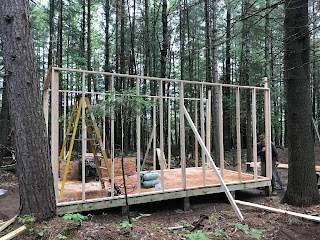 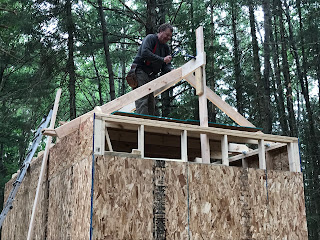 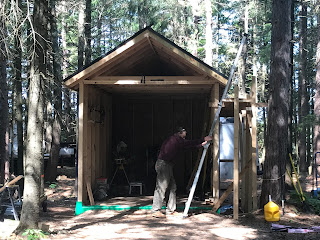 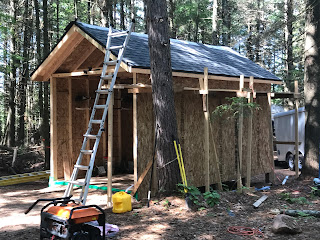 So, I think we are leaning towards making the decision towards just building a cabin instead of a full-blown house, but thankfully, we won’t make a decision about that until next year. I want for it to be as simple and easy as possible for him. Meanwhile, I continue to run back and forth home to Waupaca to keep up with things there, mainly the mowing and weed whacking and doing about four loads of laundry each time in the short space of a day and a half including the long drive. We still pack drinking water from the spring there (another chore).

Marc is having difficulty finding a cement contractor with any availability, which may force him to take a different tack in building the shop. He wanted to have the slab foundation done first but that may not be possible. Although he has the know-how to do the job himself, it’s just too much at his age and dealing with his two artificial knees, which means no kneeling or squatting.

Right now, it’s his turn to be in Waupaca, where he is finishing welding the gate and loading it onto his flat bed trailer; he plans to bring up smaller items like a burn barrel, our screen room tent, and finally, our kayaks! He’s also done some wheeling-dealing with the estate of a neighbor who passed away and is stepping in to clean up a bunch of old wooden single pane windows and two old pontoon boats. They don’t run and are in sorry shape, but he should be able to scrap the pontoons off one and we’re thinking we may be able to use the other one as a dock if we tear it down to just the pontoons and deck.

Speaking of pontoons, you all know how long I’ve lusted for a boat (years and years) so we finally decided to look around. The boat market has been red hot since Covid lockdown and good, used boats are scarce as hen’s teeth but we managed to find one on consignment the first day of looking. It’s a little larger than we were considering (22’), but it’s in exceptional condition, a 2015, with only 31 hours on the boat, motor, and trailer! We’ve had it out a few times and are having such fun with it. It’s easy for us to launch right at the ramp next door and Marc just did get it equipped with a fish finder he is learning to use. It’s easy to see why people love these boats so much—they are extremely comfortable, stable, easy to move about, they hold a ton of gear and they would be very fun to use with friends. Even on holidays, our lake is very lightly used and never crowded so it’ll be nice to get more time to use it in the future. 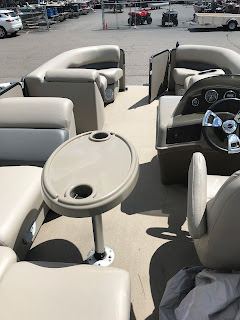 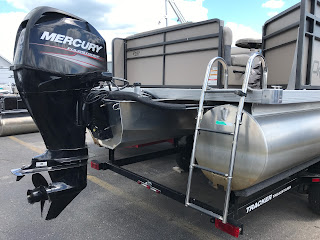 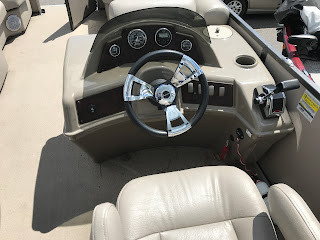 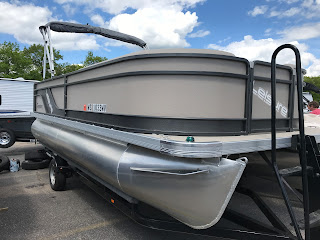 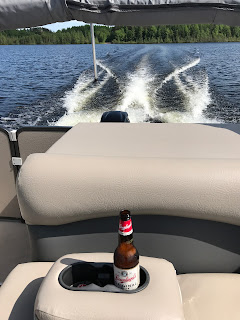 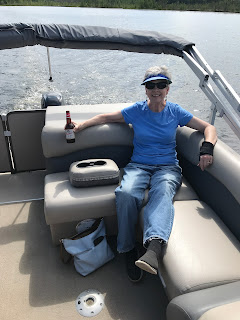 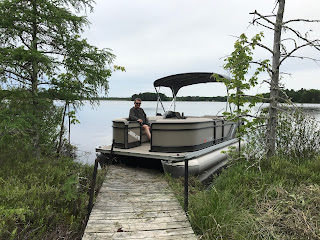 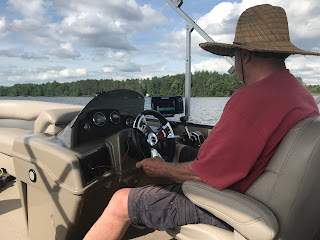