Times are certainly tough right now. For a world…for a nation…for others…for us. The sword of unemployment swings daily over our lives like a wheat scythe harvesting kernels of despair.

We consider what to do and among the thoughts is the expense of two places to maintain while we attempt to live a life on the road.

While I am in Yuma with the energy of the looming barren mountains and daily sun beaming down, I am quite content to walk the neighborhood streets, live life outdoors and soak up the sounds of my fountain. It’s ours for the improving. The neighbors are wonderful. Doves coo. 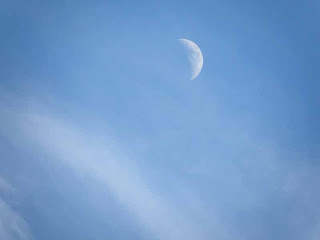 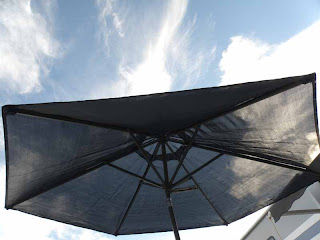 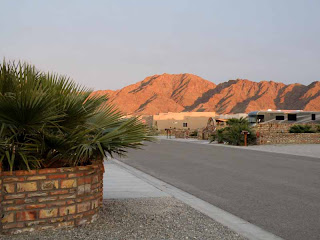 So, I forget for a time, the cry of the gulls and the freshness of the evergreen-soaked air that surrounds our doll house in Coos Bay. The neighbors here are different; after all, they come and go. Even though we’ve improved it, we can’t stay on the lot without a monthly rental payment. There are no visually sweeping vistas to enjoy, just the evergreen treetops cavorting in the wind, birds soaring, and thick blankets of fog moving in by evening. But it has a definite hold, sunk deep with the teeth of novelty, old habit and comfort. 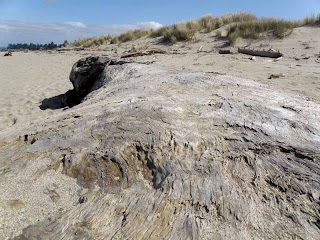 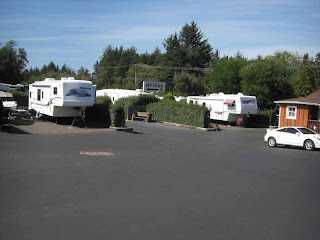 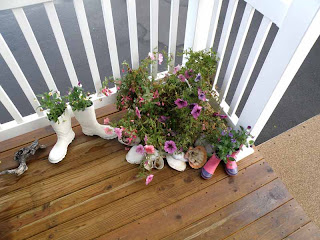 Both places call to my soul. The perfect juxtaposition—the perfect blend of retirement havens if we can manage to hang on.
Posted by Claudia at 12:54 PM

It took longer than expected to get to Coos Bay through bad weather, only to have very little time here this week before we need to leave. 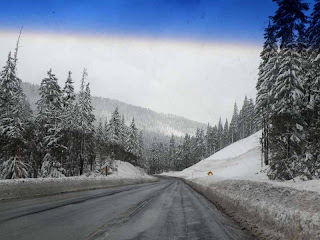 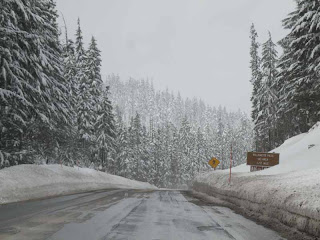 So, like a child running to its mother, I hurry down the Cape Arago Highway in the Dodge to my zenith—the quay in Charleston. The sea is calm; the water glistens, the boats hurry forth. Just like always, the Grumpy J sits at her berth by the fuel dock as my quickening pace takes me down onto the actual beach where the waves are breaking. 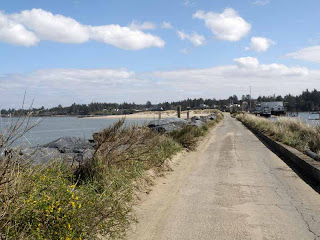 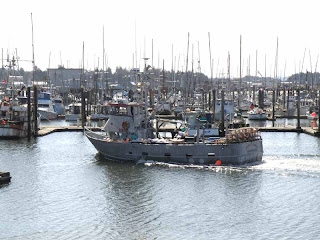 It takes nearly wet feet to get me close enough to hissing waves; I want to hug the sea so much. The air is soft and sweet—the gulls patrol and sing. It was hard the night before—our first one back—to hear the ocean’s roar beckon at 3 a.m.—the only sound coming from the night beyond the restive whistle buoy. Homecoming is so sweet. God, how I’ve missed it.
Posted by Claudia at 12:01 PM 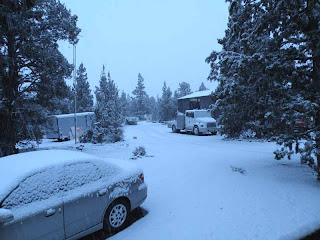 We arrived in Bend just in time for the latest storm to roll through, leaving a dusting a snow at the lower elevations and a big mess on all the mountain passes. Until this stuff stops, there is no going over to Coos Bay to attend to our business there since our Saturn has no chains. We have given up trying to keep any kind of schedule while here; figuring we get over there when we get there, which could be even after Rachael’s wedding.

It’s nice visiting with the family even if the low temperatures have kept us house-bound for the most part since arriving. On the one good weather day we had, Marc got some stuff unloaded from the Freightliner and shuffled more stuff out of storage. I made the supply run to Costco that I needed to do, got the taxes turned in to our CPA and took my mother shopping.

Just weather as usual in Central Oregon; now I remember why we are enjoying Yuma so much this winter. 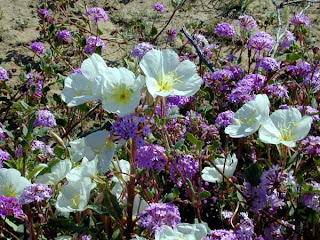 Like a harbinger of things to come, we sweltered under high heat early this week. It nearly made a record setting heat rating at 91 degrees, about 15 above normal for this time of year in Yuma. Things have been moderating lately so we’ve been in pick-up and pack-up mode on the lot in anticipation of leaving here next Tuesday bright and early. As of right now the plans are to leave our fifth wheel parked here and return to Oregon in the Freightliner pulling the Saturn. We need to return the first set of truck tires that didn’t work out for a refund and there is not room in the Saturn to haul them. We’re routing through California in hopes of better weather and to stay with friends to mitigate the costs of travel. If all goes according to plan, we’ll be returning, also through California, around the first part of April. After that, we have no idea what will transpire or where we’ll be headed next.

I hope to update the blog as much as possible in the next month without a given internet connection. We no longer have our dedicated cable connection in Coos Bay nor is there any internet in Bend we can access. I will continue to write the entries; they may just all be posted when we return. With our daughter getting married, there will be a lot going on!

The snowbirds are starting to flock out of Yuma the same way they came in; in dribs and drabs. Some of the rental lots are already totally vacant; our current tenants are due to leave at the end of March but may leave earlier. One has to wonder with bad weather still covering much of the nation where all these RVers are headed in such a hurry but maybe they are just running from the 90 degrees, figuring it could stick around!
We will soon dump the spa, cover it over with Marc’s slick new wooden cover, remove the leaded window and fountain from the wall and reset the irrigation timers for high heat watering. Our patio set breaks down into pieces, as will the barbecue—after it all stuffs the shed there is no getting back into it. Turn the utilities off and again the lot can sit desolate waiting for its next visitors as the weather turns cold and the snowbirds once again take to their yearly migration south. 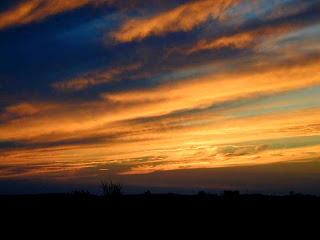 The Remains of Detroit 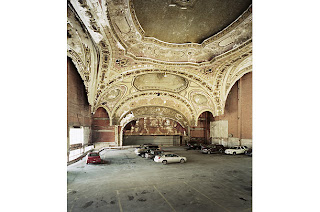 Take a moment to click this link Detroit and study these photos and where America has fallen. Few things have recently moved me so much; as we're on the verge of having all our major car companies go into bankruptcy. They are one of the few last vestiges of our former industrial strength; one of the few industries still producing family living wage jobs. Although you may not agree with the models they produce, you cannot disagree that their demise will not do our country ANY good whatsoever. Where do we go from here as America sinks ever more into the abyss of this depression? As the photographer asks: did giving away our industry for service jobs make any sense at all? "America was once the standard-bearer for quality," he says. "In transitioning from a production economy to a service economy, we gave away something that we didn't understand the importance of." Truly, as you look at photo #6: I said to myself, "this looks like something out of the former Soviet Union. Big, ornate buildings built with true artisan talent, reduced to ruin by the Communist takeover."
Posted by Claudia at 8:31 PM