"You're Lucky", A Perspective 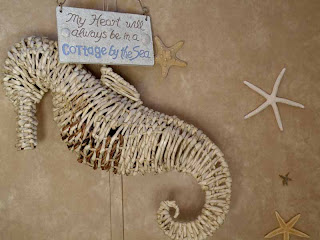 It’s the eve of our departure to Bend and thence to the sunshine in the desert state. As if to give us a good send-off, today was spectacularly clear, no wind, sea like glass. I did a farewell walk on the quay where I was intrigued by a guy in half a wet suit who was packing two crab pots back towards a pickup with a camper. There was also a flat trailer in tow upon which sat a dirt bike and some wheel type apparatus which obviously probably pulled or held the kayak that sat down on the beach. I rounded my lap, headed back down the quay and started back yet again. When I came upon him the second time I just had to ask: “That’s about the most novel way to crab I’ve ever seen. Did you do any good?” “Well thank you”, he replied, adding that indeed, he had caught five crabs “enough for a little snacking on”.

We talked a little and he asked if I lived here. I said “kind of, part time; we have a little park model right up the road and are here when we can be”. He said he envied me; he loves it here and tries to come over from Medford, where he is from, as often as possible. He dives, he crabs, he rides his dirt bike, he rides his regular bicycle, he camps. Wistfully he adds “You’re lucky.” I nod and say “Well, tomorrow we head for the desert for a few months and then we don’t know where. My husband was laid off in September.” We talk about his job a little—he is the maintenance head at a special needs school and never has to worry about layoffs—in fact, also with chagrin, tells me he is hardly even aware of any recession. I guess that’s the way it is for some folks now--those in recession proof industries. I smile and add wistfully, “You’re lucky.”
Posted by Claudia at 6:55 PM

Get Those Wheels Rolling! 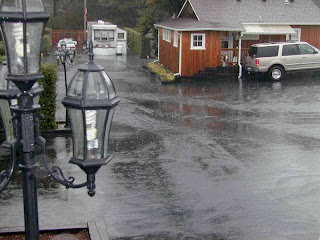 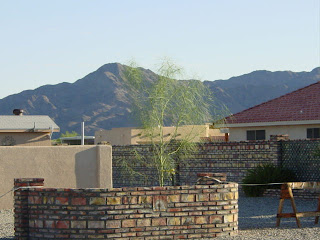 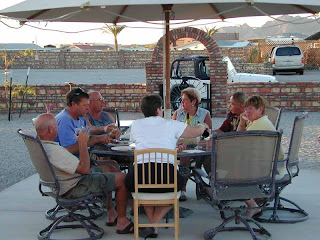 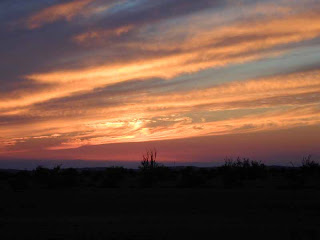 Yeah, you’ve got it right: our lot and dining al fresco in shorts in January as we happened to do at our Yuma neighbors and will be doing again shortly.

Next week, Marc and I secure the boat, lock up the park model, say “see ya” to the neighbors and head over to Bend for Thanksgiving with my folks and packing the RV for the trip south. We’ve decided since Marc is not working, rather than sit here in the cold and rain we’ll do the snowbird routine this winter. Normally we have the lot rented but we had a last minute cancellation so we anticipate being there for December and January, maybe even into February. Although we plan to have cable internet once on our lot, connection between when we leave Coos Bay and arrive in Yuma will be spotty at best so the blog may be quiet during transit. We’ll travel east through Oregon, then south through Nevada as that gives us the best boondocking opportunities; hoping to arrive sometime the first week of December.

All About the Daughter 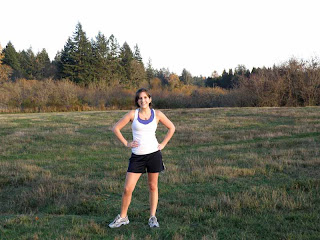 It’s been some time since I’ve visited my daughter and given that things are pretty slow here at the coast we decided a weekend visit was in order. Friday I jumped in the car and started the long slog north, primarily on I-5, to the Seattle area town of DuPont. Much of the trip was foggy, but Portland gleamed pristine in the sunshine four and a half hours into the journey. The trip is about 350 miles one way. 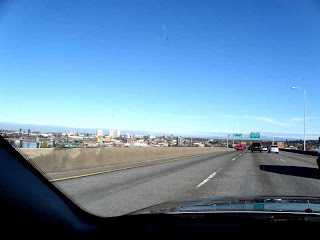 I arrived to both her new little kitty Derby, and her boyfriend who had just gotten through with the Army for the day. After getting acquainted with and playing with Derby for an hour or two, I put together the crab brushetta Rachael had requested for dinner. I had also brought them a surprise of two fresh crabs. Once she arrived home they both dug into it like hungry dogs! 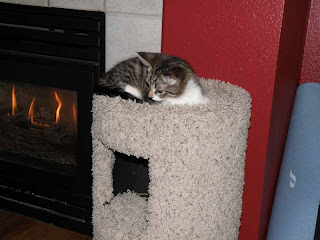 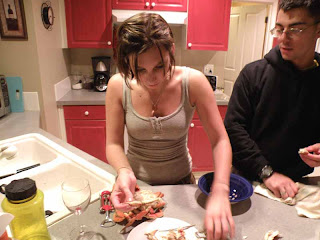 We didn’t do anything special besides visiting, shopping and lunch out at the hugely packed Tacoma Mall since the visit was so short. Rachael and Brandon don’t get a lot of time off together so I left Sunday early feeling like I might be coming down with a cold. DuPont is a planned community—not just a neighborhood—but the entire town, on the outskirts of Ft. Lewis and provides nearly new housing communities and shops, winding streets, jogging paths and even a large nature preserve left a la natural since the early 1840’s Ft. Nisqually, originally settled by the fur traders who worked the area. It reeks “Pleasantville” with its neat homes all lined up with front porches sporting pumpkins, decorations of the season, and American flags. Majestic Mt. Rainier broods silently above it all. 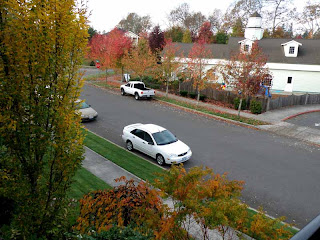 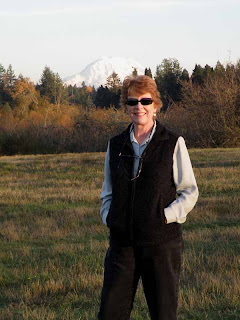 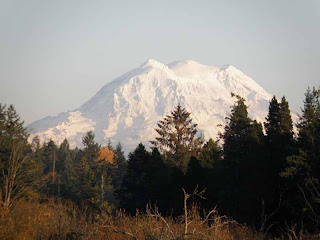 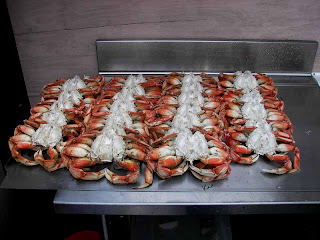 We’ll be moving into our third week of rainy weather here at the Oregon coast with the extended forecast showing no break in sight. To keep from becoming totally insane from “house-i-tis” our main outlet has been going crabbing. Yesterday was no different, although we did get a weather break of sorts in that it was dry and at one point we saw sun for about half an hour.

The grey days turn the bay into molten steel, silken and shimmering in the wind bourn waves. 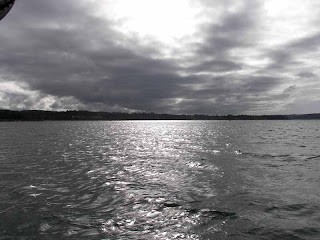 We’ve also noticed with bad weather that we have a flotilla of seagulls following our boat like a miniature navy. They are hungry and create a feeding frenzy when Marc tosses the used bait overboard as he gets ready to rebait the pots. 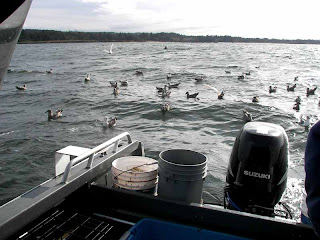 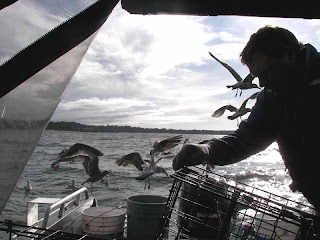 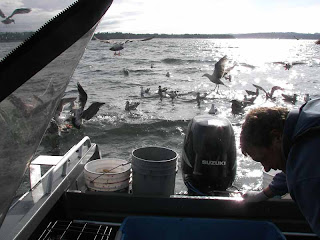 Once again we’re the most popular folks in the RV park since we usually share our bounty with the seniors here who don’t have either the physical or financial possibility of crabbing. They have to pick their own though; our fingers are sore enough.
Posted by Claudia at 9:14 AM

I know you’re sick of me talking about crabbing so I won’t do it much today beyond including a few pictures. Yesterday, we shoved off from the dock as the only small boat out on the bay as we jumped on the gas to cross to our island hot spot. I didn’t take the camera on the boat because it was raining very steadily and things were murky. We’ve entered the typical winter weather pattern of off and on rain or steady rain which this time has a run of about two weeks. But change might be a comin’ for us. More on that later.
Another fabulous catch. 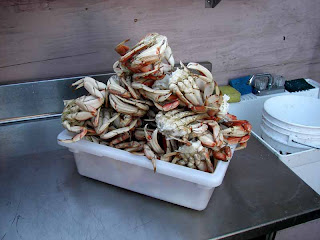 Around here, even our cat is into it up to his “ahem”…. 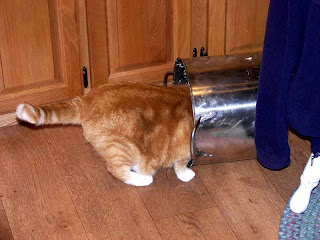 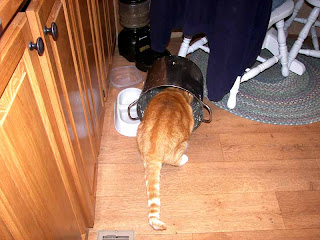 Personally, I’ve never had a lot of interest in the sciences although I always excelled at them in school. I think they skated too closely to the mathematics field, which was absolute anathema to me; consequently science just never appeared on my radar as a possible career. Hindsight now says I likely missed something, as I can imagine how exciting it might be to be a forensic scientist defeating crime for instance. Here locally, we have the marine biology sciences.

Every day when I walk the quay I pass the gray shingled village atmosphere of the Oregon Institute of Marine Biology (http://www.uoregon.edu/~oimb/ ) run by the University of Oregon. 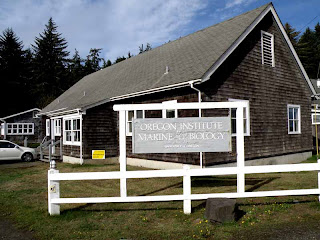 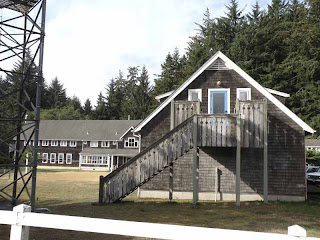 Frequently, their professors and their canine companions join me walking the quay and I think to myself how handy this location must be for them and how fortunate they are to have the sight of the harbor view right from the front decks of vaguely New England-looking-clustered cottage units that house them. 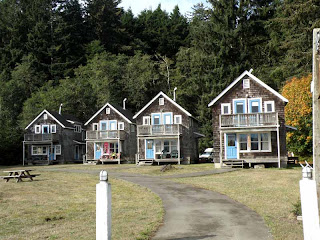 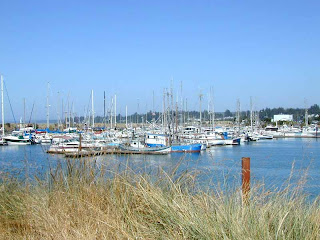 The campus is composed of about 23 buildings and over 100 acres of land originally ceded from the Coos Head Military Reservation and actually dates back to 1931. It’s now both a research and teaching facility operating year round with a flotilla of boats available, including the 42 foot inboard trawler often seen tied to the dock or coming back to port laden with life-jacketed and slicker-wrapped students. 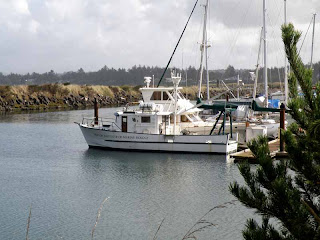 Directly behind the science center is a wonderful swath of relatively older growth timber (70 years) which stretches all the way to the Coos Head Coast Guard lookout tower which gives spectacular views on clear days out the jetty to open ocean. There’s a little known dirt road directly through the college which traverses this forest of Douglas fir, Sitka spruce, western red cedar and western hemlock and puts one in mind of a fairy forest it is so quiet and dark with lush ferns. The entire area is enchanting; sequestered on a dead end road, surrounded by sea sights, smells, and sound. What lucky students. 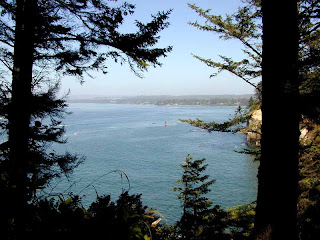 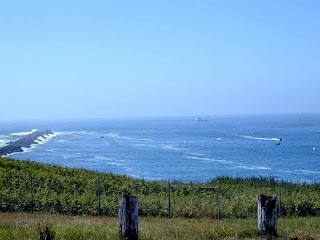