I Have Been Remiss... 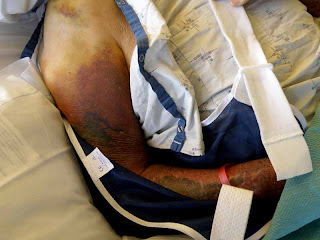 in updating all my readers on my father’s condition. It has been a very trying week for all involved as he was finally moved from three days in intensive care to a regular room. He is making slow improvements but because of his broken shoulder, his ability to use a walker and try and get his hip moving has not been successful. He is being evaluated for the possibility of entering the hospital rehab unit on Monday but after another unsuccessful attempt to move his leg and take a step today, even he is wondering how he will do in a program which may prove way too vigorous for him.

Dealing with everyone’s emotions and the physical task of driving my mother to the hospital every day, and then many times sitting there for hours and hours with them both, has taken its toll on me. I am awash with uncertainty over what may come next and how this will impact the entire family. My mother seems to outwardly maintain but seems moments from the ragged edge of a complete breakdown. I probably appear that way myself, trying to juggle thoughts of a winter in Bend and helping them and the absolutely crushing burden of the fact that we soon must get jobs or go under financially. How can one be forced to make such a decision?
Posted by Claudia at 2:22 PM