A Spring in My Step 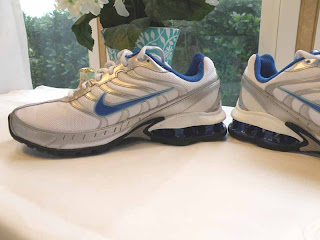 Very recently I decided to try and crawl out of my state of inertia and apply for a job at WalMart when I saw a sign saying they needed store remodel help. After a fairly arduous interview process, which took an hour and a half and involved three different managers, I was told I could immediately go out and see the lab for the drug screening and after that and a background check returned, they would be in touch. Obviously, all that went well during the week I was in Bend and I received the call last Friday to report to work Tuesday. 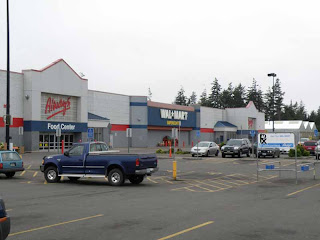 So, what’s with the goofy shoes you ask? Given that my walking shoes have seen quite a few miles up and down Charleston’s quay, I figured it was time to look for something lightweight, yet springy, for my eight hour shift on my feet at WalMart. So…these are what I ended up with. I have yet to wear them so can’t comment on how they will do to maintain spring in my step, but I hold out high hopes.
This week has involved extensive training, computer based and lecture, and we shall all be set free on the floor starting next week. These are all temporary positions that will run until approximately August 19th. I can’t believe my luck in snagging a good schedule however; I work M-F, 8 to 5. It might have had something to do with the begging whine in my voice when I mentioned to personnel that us older gals would have a very hard time staying up all night for graveyard shift…so please God, don’t give that one to me!
I’m still not quite certain what my tasks will entail but I figure it will likely involve a lot of stocking and moving of inventory. So far, there are two things that have been really hard for me to get used to: working eight hours under bright florescent lighting which leaves me with red, burning eyes and no glimpse of the day outside; and not being able to drink all the water I am used to having in a day. I know; it’s a silly thing, but I normally drink lots of water and now that I am not allowed to do so out on the floor I find I am suffering from thirst of the worst sort!
If nothing else I figure this experience should be very humbling. I have been so fortunate in my previous careers to be a fairly autonomous and independent employee, working for the most part with extremely minimal supervision and a great degree of latitude in the makeup of my day. How different it is being in the rule-driven corporate belly of the world’s largest employer; (bigger now than even our federal government, the world’s second largest employer) and knowing that for many people, this is all they will ever know their entire working lives. Kind of like the bird that never gets uncaged to truly fly. Of course, birds of that feather, having never experienced freedom, may not know the difference. How sad is that?
Posted by Claudia at 9:30 AM